Chili, like life, is what you make of it.

Click here for the full recipe and nutritional information!

I’ve debated for some time whether or not to post this recipe. Chili is one of the easiest foods to throw together, and with so many possible ways to make it (and I make it differently every single time I make it), it’s hard to decide on just one particular recipe to showcase. However, with winter hanging on for dear life, chili is a great cozy meal to keep warm, so if I can inspire you to whip up a pot of satisfying vegan chili, then my job is done.

As suggested in the name, this chili recipe is very simple, but I’ll talk you through a few customizations along the way. Also, this recipe is for no-bean chili. I grew up with no-bean chili, and I’ve never really liked chili with beans at all. You can of course add beans to your liking, but if you’re missing no-bean chili since going vegan, you’ve come to the right place.

I like to soak a cup of TVP in about 2-3 cups of boiling water. It doesn’t take very long (about 15 minutes at least), but it’s a step that I like to prepare before starting the rest of recipe. It’s extra delicious if you happen to have beef-flavored TVP. You can boil a kettle while dicing your onions and peppers.

In about 2 tablespoons of oil (or a bit of water if you’re oil-free), saute your onions and peppers in a 4-qt saucepan over medium-low heat until they get a bit of golden-brown color. I’m using yellow onions and yellow bell peppers, but you can use whatever onions and whatever peppers (including chili peppers) that you prefer. I would normally add jalapeños to this, but this particular batch will be eaten my certain members of my family who I would consider lightweights where spice is concerned!

Here I’ve added the spices. I always use minced garlic, ground cumin, smoked paprika, dried cilantro, and a tiny bit of ground chipotle pepper – not enough to add any heat, but just enough to contribute its warm smokiness. If you don’t have any, the tiniest dribble of liquid smoke would do nicely. Again, if you like it spicy, add more chipotle, maybe some cayenne. Sometimes I add a teaspoon or two of cocoa powder and a bit of ground cinnamon for a rich, mole-like flavor. Now is the time for your imagination!

Once the spices are warmed through and fragrant, it’s time for the tomatoes. Fresh is of course best if you have good ones, especially if they’re just on the cusp of being too soft to eat, but I usually use canned. This time I’m using a 28 oz. can of fire-roasted tomatoes (my favorite), and they’re salty enough to my taste to season the whole batch of chili. Sometimes I add a bit of tomato paste for added richness (or simply because I have a half a can in the fridge I need to get rid of), but I didn’t this time. I also add the TVP and all of the soaking liquid.

Taste it to see if it needs salt or any other seasoning. Many people will put a thickener, such as masa, into their chili. I quite like mine thinner and more stew-like. If anything, I’ll put about a teaspoon of ground flaxseed in just to give it a little more body.

Cover and simmer on low, stirring occasionally, for at least two hours. I should say at this point that this would be a great slow-cooker recipe, but I don’t own one, so I’ve never tried it. I cooked mine for about three hours, and although it’s technically ready to eat at that point, most chili connoisseurs will tell you that it should be served the following day, which is what I did.

And there it is! Pretty simple, but even as it is, it’s pretty delicious, too. I usually like to serve it over some cornbread with a bit of guacamole or vegan sour cream and a few pickled jalapeño slices. It’s also great on your favorite vegan hot dogs with plenty of my Oil-Free Chili Con Queso. 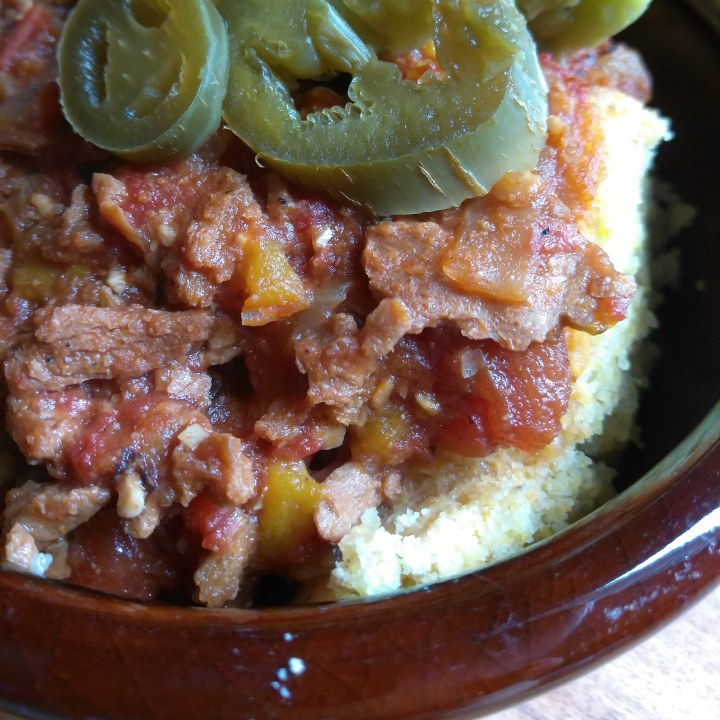 Let me know in the comments if you give this one a try, and also let me know if and how you made it to your taste!