Warning: far too many cat photos ahead.

Back in 2013, I started Molly Rose Balms, and I was just getting into the vegan social media scene. I wasn’t vegan yet, but as MRB was a vegan brand pretty much from the start, I was primarily marketing to vegans. The vegan message was getting to me, but I wasn’t ready to receive it. I still didn’t get it. 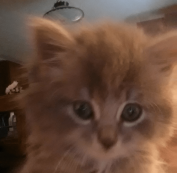 On top is Judy, and on the bottom is Betty. As you can imagine, I instantly fell in love with them. The only other pets I had ever had were a few betta fish in college, but like most people, I bonded with them about as much as I would bond with a houseplant. Judy and Betty were different; they had likes and dislikes, they could cuddle and claw, they had personalities. They were kittens, but they already were pretty much who they are today. They weren’t fluffy toys or decorations; they were real.

And then I got it. How were these kittens, full of personality and individuality and character, any different from cows? How were dogs any different from pigs? How can one coo over a pet parakeet and eat a chicken? I’m obviously fully aware that there are plenty of non-vegan pet owners (like the rest of my family, for instance), but I believe that rescuing them in conjunction with the vegan social media influence led me to October 13, 2014, the day I went vegan. 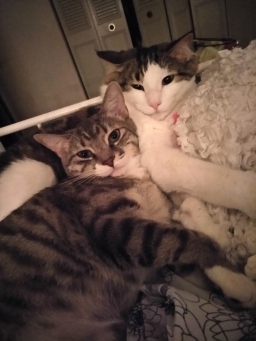 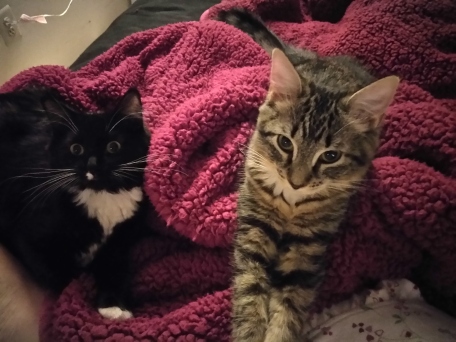 As you can see, I’ve rescued four more kittens since then (L-R: Miss Kitty, Benny, Jackie, Bella). Yup, six cats total. All full of life and their own personalities. And no, they are not vegan. I know that there are vegan cat foods out there, but I give them meat-based cat food.I’m sure there are plenty of cats who survive and thrive on a plant-based diet, but I’m not willing to experiment on my cats. Maybe that’s hypocritical, but I don’t see it that way. They eat what they need to eat, and so do I.

Do you have any similar experiences with your pets, or with animals in general? Let me know in the comments!

4 thoughts on “How My Cats Made Me Vegan”