If you’re a regular reader of my blog, you know that I’m not exactly what you might call a “fit” person. Like, at all. I’m trying, I’m doing better, but let’s be honest, it doesn’t show. So earlier this year, when I decided to try harder at getting fit, I knew that I wanted to get a fitness tracker. I also knew that, with my beginner’s level of fitness, it didn’t really need a lot of bells and whistles.

I had previously owned a Jawbone UP tracker, so I knew based on what that one did and didn’t have what features I was looking for. I wanted a heart rate monitor. I wanted it to be waterproof as I planned to start swimming regularly. Most of all, I wanted a display. I did various Google searches and learn one important thing: fitness trackers are almost universally PRICEY. I kind of figured that already because my UP was $50 on clearance back in 2014, and that one didn’t have any of the features I was looking for, but damn. I struggled to find any under $100, and the ones with the features I wanted were all over $200. I was resigned to my fate until I found the Mi Band 2. 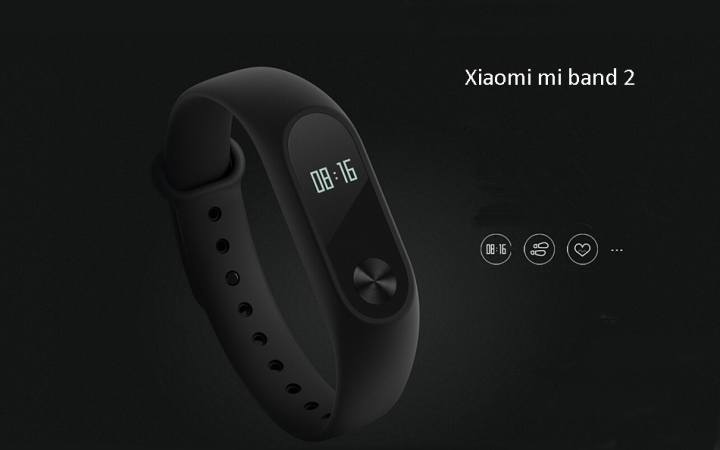 I can’t find the link now, but it was on a list of the best fitness trackers of 2016, under the heading “Best Bargain Tracker of 2016”. The cost: $25. Heart rate monitor. Waterproof. Bluetooth-connected. To be honest, I didn’t have high hopes. It just seemed too good to be true. But I gambled away $25 (including shipping) and waited for it to arrive. I bought it from this site, but it is also available on Amazon for about $15 more if you’re more comfortable with that. Since it’s from China, I had a month to read and watch reviews in anticipation.

When it arrived, I whipped it out of its packaging so fast you could practically hear a sonic boom. By now, I already knew about its display and all of its great features, including calls, texts, and app notifications all sent to the watch via Bluetooth, its super-long battery life, and its smartphone unlocking abilities. The Mi Band 2, along with the app, were incredibly easy to set up and use. There are a ton of third-party apps to go along with the main one, my personal favorite being this one that allows you to control your music player via the Mi Band button. There are also apps that allow for constant heart rate monitoring, but that will eat away at your battery. With an otherwise 20-day battery life, though, it might be worth it to you. As always with third-party apps, proceed with caution.

So how does it work? Great, in my opinion. I know that heart rate monitors of this sort are never 100% accurate, but I’ve found it to be equally as accurate as any stationary bike or treadmill that I’ve compared it to, so take that as you like. The waterproof aspect is absolutely true; shower, pool, beach – mine has survived these like a champ. It tracks my steps perfectly except when I’m pushing a shopping cart, though from what I understand, this is an issue with even the expensive guys. I just try to remember to take it off when I get to a store and put it in my bra. Problem solved.

One of the main things I don’t like about it is the fact that it doesn’t track any sleep during the daytime. Sometimes I have to work overnight, so I sleep during the day. Sometimes I nap. While I can manually input sleep times, my light/deep sleep isn’t being tracked. Tough luck if you want accurate sleep information. I also don’t this it does a stellar job of tracking my sleep even at night. Maybe my sleep patterns have changed dramatically in the past two or three years, but I know that my previous tracker showed that I had much more deep sleep than this one does. I kinda wish I still had my 2012 UP for sleep sometimes. In my opinion, that is the one thing that it has over the Mi Band 2.

Another minor problem (to me) with the Mi Band 2 is the lack of diversity in workouts. You can track runs, both outdoors and on a treadmill, but that’s about it. You can tag any sort of activity you want, but in practice, that doesn’t really mean anything. It doesn’t account for those calories (though you can link your account to a Google Fit account). I’m not a runner, and frankly, most days I’m not even walking all that much either. My current preferred exercise is the stationary bike. I usually attach my band to my shoe lace so that my pedals count as steps. Is that cheating? Sure it is. But at least I’m getting a slightly more accurate look at my progress.

So is it worth it? As far as I’m concerned, absolutely. There is a newer version, but it doesn’t have a heart rate monitor, boasting instead a longer battery life. I’d buy this one again in a heartbeat. It’s such a great basic tracker, and I love that there are so many replacement straps for it, from classic to colorful. Again, if you’re someone super into fitness, maybe this isn’t for you. If you’re someone who really needs accurate sleep data, this definitely isn’t for you. But if you’re someone, particularly a runner, who needs just a bit of everything at a rock-bottom price, then the Mi Band 2 is just what you need.

Do any of you own the Mi Band 2? What are your experiences? Do you prefer another fitness tracker? Let me know!

Not sponsored. All opinions are my own.